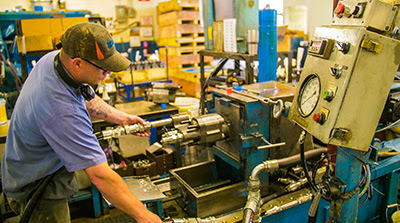 Unlike many hydraulics manufacturers, Permco tests and certifies every pump prior to shipment.

Not only do such differences matter in design and manufacturing, they hold for how pumps are assembled, too. Building a high-quality pump is meticulous work, stressed Shell. “Our people do prep work very similar to what you would see in a good engine rebuild shop.” For instance, they might take a honing stone or emery cloth and kiss a few areas on the gear before installation. That’s because when gears are pulled from a warehouse shelf and moved to the assembly station, it’s not unheard of to accidentally bump and nick a gear. If that gear gets assembled as is, and it subsequently rides on the soft bronze plate, the burr will cut a groove and create a leak path. Left unchecked, that pump will run inefficiently and underperform. Few manufacturers take such a hands-on approach to quality, emphasized Shell.

“But probably the biggest thing that differentiates us is we test every pump that goes out of this building. For peace of mind from the customer’s standpoint, that’s huge,” he stressed. Each pump gets assembled with new parts to create a tight package. Then it’s run up to 2,000 psi pressure, where the components flex and the gears will take a take a slight wipe—removing perhaps 0.0005 to 0.001 in. of material from the housing. That’s acceptable, notes Shell, because filters on the test benches trap the wear particles, instead of remaining behind to contaminate a customer’s hydraulic system.

Tests confirm leak-free and quiet operation and that flow meets design specs. And any problem gets flagged immediately, not at the customer’s site. It’s a significant undertaking. That’s why most other manufacturers only test 1 in 10 or 1 in 50 units, said Shell.

Finally, the approved product is assigned a serial number that includes the initials of the assembler—as a further sign of the workmanship that stands behind a high-quality pump.